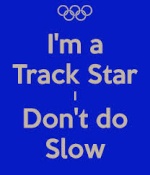 Maryborough 2nd January 2012
The 151st Maryborough Gift was held under extremely hot and windy conditions, which were tiring on
athletes, officials and spectators. As a result the stewards implemented the VAL heat scratching policy
allowing athletes to withdraw from any event without penalty. Also, with such extreme conditions the
crowd was down slightly on previous years. Special mention should be made of the solid performance
turned in by the course commentators Matthew Webster and Terry McGarity. It was a long day in the
sun for the duo and they managed to maintain a steady flow of informative interviews and race calls
throughout the day
Anyone who would like to write the “wrap” for Ringwood and/or Rye, please
contact Mark at the office.

First National Real Estate 70 metres Open final
Young interstate visitor Isaac Dunmall confirmed his position as a very promising sprinter when he
captured his first Victorian win in the 70 metres final. Isaac (6m) won with plenty of authority as he
defeated Matthew Eddy (4.25m) and Jesse Matthews (5.25m) in the time of 7.72.Craig Rollinson (5.5m)
was a close fourth. The form looked impressive later in the day when Eddy took home the main race
sash. Isaac showed signs of an early win with his impressive performances at Gippsland before
Christmas. Dunmall, from Queensland is trained by Wayne Lever.

D.J.Wagstaff Funerals 70 metres Novice final
Nicholas MacGibbon (5.5m) was another to open his winning account in professional athletics when he
impressively won the novice 70 metres final. Nicholas defeated Travis Pike (7.25m) and Jack Dooley
(6.75m) in the time of 7.82. This is Nicholas’ fourth year in the VAL and he had made several novice
finals before his win. Nicholas is trained by his father Nick McGibbon, a long time VAL competitor.

Maryborough/Castlemaine Football/Netball 70 metres Women’s final
The Hargreaves brothers have made a habit of running the quinella in events all over the state but at
Maryborough the Boatman sisters created their own bit of family history in the 70 metres women’s
final. Julia Boatman (6.75m) notched her first VAL win by defeating her little sister Tiffany (8m) in the
time of (8.89). Julia has consistently made finals this season and her win was not unexpected but for
Tiffany, Maryborough was her first final appearance. Both sisters are trained at Ararat by coach on the
rise Marcus Cooper. Sonya Pollard (8.5m) finished in third place, inches ahead of the much improved
Tara Domaschenz (3m).


Bendigo Bank 120 metres Maryborough Gift final
Continuing on with his excellent Gippsland and Bay Sheffield form, Matthew Eddy (10m) achieved his
best VAL result with a clear victory in the Maryborough Gift final. Matthew adds his name to a list that
includes some of the fastest names in Victorian Athletic League history. Matthew defeated David Tinney
(8.5m) and Cam Dunbar (7.75m) in the very respectable time of 12.29. Eddys winning margin of almost
two metres is one of clearest wins in a major gift for some time. After the eight heats, Cam Dunbar
,Fabrice Melanie(9.25m) and Eddy looked the best winning chances but this changed at the semi final
stage with Eddy having the fastest time clearly. Mark Hignett (11.5) made his first major gift final for
some years and looks sure to feature prominently at Rye or Wangaratta. Regular gift finalists Kevin
Brittain (5.75m) Josh Tui (9m) and Melanie failed to match Eddy’s early pace and struggled to make
ground. Eddy is trained by Kerry McConnon, already enjoying a good season.

Maryborough Highland Society 120 metres Women’s Necklace final
The interstaters continued to enjoy Maryborough success when the South Australian, Megan Letton,
won the main ladies event, the 120 metres Necklace final. Megan (13.5m) is better known around the
circle events with a win in last season’s Maryborough women’s 400 metres, followed by a Stawell
second over the same distance. She began well and managed to hold a clear margin over Eleni Gilden
(10.75m) and Tara Domaschenz (8m). Megan is trained by regular visitor Frank McHugh, a force in South
Australian athletics for many years.

Blue Ribbon Foundation 120 metres Novice final
Travis Pike after four seasons of making countless finals held onto to win his first VAL event with a
narrow win in the 120 metres novice. Travis (11.5m) defeated Paddy McDonald (7.75m) and Brady
Lehman (11m) in the time of 12.71. Travis is trained by Nick Fiedler, who is enjoying another successful
season, including three wins at the recent Bay Sheffield carnival.

Peter Egan Retravision 120 metres Veterans final
After several seasons Mark Hignett (6m) returned to the winners list with a victory in the Veterans 120
metres final. Mark, previously a 2006 Stawell Gift finalist, came off the back mark and defeated Paul
Hughes (6.5m) and Scottish visitor Graeme Armstrong (14m) in the time of 13.12. The form held up
throughout the afternoon when Hignett made the gift final and Hughes was to take out the 200 metres
final. Graeme Armstrong continues to race well and with last weeks win in Adelaide is quickly recouping
his holiday expenses. Mark Hignett is trained by VAL stalwart Trevor Beaton, one of our top 400 metres
athletes of the 1980’s

Maryborough District Advertiser 200 metres Open Final
Paul Hughes finished 2011 with a string of minor placings and started 2012 with a good win in the
Maryborough 200 metres final. Paul, never far away in most events, won his heat impressively and
carried on with the good work in the final to defeat Rodney Matthews (17m) and Andrew Howell (11m)
in the time of 20.55. Although Paul had previously been placed in finals at Waverley, Frankston and
Epping this season, Mondays win was his first since Northcote 400 metres in 2008.

Maryborough School House Retirement Village 300 women’s /Veterans Final
After seventy three starts and six seasons in Victorian Athletic League competition Lisa Roberts (73m)
finally made the long trips from South Australia worthwhile when she raced away for a most
comprehensive win in the women’s and Veterans final. Lisa put the task beyond most of her opposition
with a slashing heat time. Lisa backed that up with a quicker run in the final to defeat Megan Letton
(42m) and Steve Tilburn (31m) in an exceptionally fast 33.78 Lisa made numerous weekly trips to
Victoria during the winter to compete with the VCCL and has reaped the rewards of a solid winter. Lisa is
trained in South Australia by Michael Buckler.

400 metres SportzBiz Final
Lonain Burnett (29m) continued the Burnett tradition in professional athletics when he won the
Mayborough divison of the SportzBiz novice 400 metres. Lonain, son of C.C. Burnett and brother of
Kirrliy won with a nice turn of speed before the home turn to put himself in a winning position. He raced
away over the concluding stages to defeat Travis Pike (36m) and Conor Nunn (32m) in 48.03. Father,
Craig was a very consistent miler in the 1980’s and Kirrily is a winner of many races in her short career.
Lonain in his second season with the VAL is trained at Bendigo by John Knott, himself a VAL competitor
of some note.

Clarrie Smith 400 metres Open final
Daniel Khobyar (30m) showed he would have no trouble making the transition from novice winner to
open class competitor with another authoritative performance in a 400 metres event. Daniel, a recent
winner of a final of the SportzBiz series, always looked in control of the event as he raced away to defeat
the fast finishing David Girolamo (50m) and Jesse Matthews (24m) in 47.13. Girolamo was passed by the
winner before the home turn but stuck to his task well to be finishing on again in the final stages.
Khobyar, although in his third season, has only this season competed on a regular basis. Daniel, from a
boxing background, is trained by Eric Sapac, a winner himself earlier in the day.

Prime’s Discount 400 metres Women’s Final
The women’s 400 metres heats were combined to make the race a straight out final, much to the relief
of the majority of the contestants. When the field eventually lined up for the event it was Eleni Gilden
(35m) who raced to the lead in the straight to hold out Tara Domaschenz (40m) and Kim
McDonough(43m) in 53.99. Eleni, who like her sister Rosamond, rarely misses a final had earlier finished
second in the Ladies Necklace final. Tara, with her third finished a very busy day with no wins but many
excellent performances.

Treble Jewellers 800 metres Open Final
Eric Sapac (42m) made his intentions known early in the 800 metres final when he ignored the chances
of the main body of the field by setting out after front marker John Abbott (144m) from the gun. The
rest of the field sat back and couldn’t “tack on” to Eric as he raced hard after Abbott. He gradually made
ground on Abbott and had the leader collared as they straightened for the run home. With the fast pace
set by the winner the remainder of the field spread out over a wide area, with Dominic Hoskins(34m)
doing the best of the rest to finish third. The time of 1.51.26 was an excellent effort in the hot and
blustery conditions. Eric back from competing in Adelaide at the Bay Sheffield where he raced well is
gradually developing into one of the VAL’s better middle distance competitors.

Harvey world Travel 1600 metres Open Final
Bendigo distance athlete Cody Williamson (80m) ran a “one man” race to chase and pass Greg Hilson
(190m) at the 200 metre mark to career away to win by an ever increasing margin in 4.09.7 Another
backmarker Matthew McDonough (85m) ran on for third but couldn’t go with Cody early to be a winning
chance. Cody worked his way through the field and looked the winner as he entered the back straight
for the final time. David Haigh (135m), fresh from his Bay Sheffield win battled on gamely to finish
fourth inches ahead of Wayne James (270m).Cody, a Rye 1600 metres winner last season, is trained at
Bendigo by John Burke, ably assisted by Neil McDonald.

Wattle Office Supplies 1600 metres Women’s /Veterans final
Robert Kenshole (390m) was yet another long time VAL athlete to come away from Maryborough
with a maiden win when he battled on doggedly to hold out David Page(95m) and Ashley Sandison
(90m) in the time of 4.31.9.Robert led from the outmark and kept the pressure on throughout. Page,
suffering a penalty for a false start, made a concerted effort in the last lap but ran out of ground
although finishing well clear of Sandison. Lauren Crowe (200m), another Adelaide winner, tried
hard to make up the leeway early but tired over the concluding stages. Robert is trained by Adrian
Wallace and is seen training regularly around Gosch’s Paddock