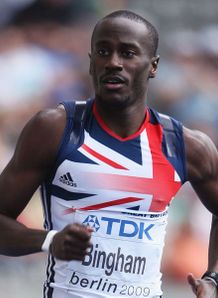 'Home' comforts
Bingham is finally finding his feet after switching from the US
By Nicola Bamford
Skysports.com
24th August 2010

More than two years have passed since he switched allegiances to compete for Great Britain but 400m runner Michael Bingham is finally finding his feet for his adopted home.

The 24-year-old from North Carolina made the decision to turn his back on the United States in the spring of 2008.

However he secured his first individual medal in a GB jersey in June this year when he sped to one-lap silver in the European Championships.

He followed that success up by combining with his new team-mates to scorch to second in the 4x400m relay in Barcelona.

Bingham clocked 45.23 in the Spanish city to throw down an early marker ahead of the London 2012 Olympics.

Bingham, who was fourth behind Olympic champion Jeremy Wariner in the Crystal Palace leg of the IAAF Diamond League, said: "This year has been a growing experience. I switched coaches, I moved training bases, and I felt the pressure to follow up last year's success with another strong year.

"Up until the European Championships, I found it hard to find my rhythm but I think I'm on the right track."

Despite picking up the silver, Bingham was disappointed not to have won gold.

"I panicked," Bingham said. "I think I had the race won, but I knew the others were coming and I panicked.

"If you panic in the 400m, you lose all technique. Luckily, worst-case scenario, I got a silver. But it definitely should have been a different colour."

Bingham, whose father is from Nottingham, recognised that life as a professional athlete would be tough in the notoriously hard US sprint squad so he instead took a chance on the British system - and luckily for him, he has been welcomed with open arms after a bumpy start.

Support
"I switched to the Aviva Great Britain and Northern Ireland team because I felt compelled to run for the country of my father, and now, the country of mine as well," Bingham said.

"I genuinely and wholeheartedly wanted to run for the Great Britain and my dreams came true and thankfully I'm running decently. The entire team supports me and they have completely accepted me.

"I'm happy that the media has now accepted me as well. I think people were a little sceptical at first, but eventually they accepted me and supported me. I enjoyed hearing the cheers while I lined up for each race in Barcelona."

A 2005 US junior decathlon champion, Bingham placed third in the 2008 Olympic trials just a few days after receiving his visa and thrust himself into his new team when helping them to finish fourth in the Beijing Olympics.

The following year saw another upward curve for Bingham, as he improved to seventh in the World Championship final in lifetime best of 44.74 - his first clocking under the magical 45-second barrier.

"I'm not motivated in the way most athlete's are," Bingham said.

"Most get angry and pumped up before training and major races trying to force their goals. My only goal is to progress each year, in most aspects of my life.

With rival Martyn Rooney having finished third in Barcelona, as well as Conrad Williams and Andrew Steele pushing hard, Bingham believes the 400m is beginning to thrive once again in Britain.

"The 400m has lulled since Mark Richardson, Roger Black and Iwan Thomas left, but in the past two years we have seen a steady return of the event," he said.

"I am very optimistic that we all should be ready by 2011 and experienced to take on the world in 2012.

"Martyn, Conrad, Steely and myself all look forward to running quick and making the final. The real tests are championships and the more finals you make, the more you learn, and the better your chances are to medal."

» GB Head Coach at war with athlete over twitter comment
» A Powell - Statistically, the most dominant athlete in history
» An athlete's advice on how to improve the Diamond League
» The secret behind athlete David Rudisha's speed
» Carmelia Jeter's 10.70 earns her Athlete of the Week