GOLD Coast hurdler Sally Pearson has locked herself in as favourite for a maiden world championship after a scorching win over 100m in the Diamond League meet in Birmingham overnight - clocking the fastest time in the world this season.

Pearson broke her Australian record with a 12.48sec run to win the 100m hurdles at Birmingham's Alexander Stadium in the fastest time in the world this year.

The 24-year-old led home four Americans, including Danielle Carruthers and Kellie Wells, previously the fastest in the world this season.

After equalling the meet record in her heat, Pearson held off Carruthers (12.52) as she did to win in Lausanne just over a week ago in her Diamond League debut this season.

The Commonwealth Games champion and Olympic silver medallist in the 100m hurdles, Pearson shaved two hundredth of a second from her previous best time with the Birmingham run to rocket her to favouritism for the world championships in Daegu, South Korea, in September.

BIRMINGHAM, England (AP) - Asafa Powell clocked 9.91 seconds to win the 100 meters in difficult conditions at the Aviva Grand Prix Diamond League meeting on Sunday and go some way to backing up his pre-race claim that he is the "No. 1 sprinter this year."

The Jamaican was delayed by a false start and then a faulty start before cantering to victory in damp conditions ahead of fellow Jamaicans Nesta Carter and Michael Frater.

Powell is hoping to usurp sprint king Usain Bolt at the world championships in Daegu, South Korea, which begin Aug. 27.

The 28-year-old Powell said in the buildup to the Birmingham meeting that he felt like the "man to beat." Bolt is the world record-holder, but Powell is the quickest man this year after running 9.78 in Lausanne 10 days ago.

"I was only going to do enough to win today," Powell said. "I didn't want to push too hard. I just wanted to get the win. At the worlds, I'm definitely going to win. I'm going for it and I'll try not to disappoint."

After a 9.95 in the heats, his 70th sub-10 second run, Powell was expected to better that in the final - especially as the earlier rain had cleared up to give way to slightly improved conditions. But after Jaysuma Saidy Ndure of Norway false-started and was disqualified, there was then another abandoned start before Powell could finally get going.

"I was a bit cautious in the final with all the false starts and it was cold out there so I didn't push it from the start," Powell said. "But it was OK. I'm fine with that. We all want to get the best start but when there's false starts it puts you in a different zone."

In the women's 100 hurdles, Sally Pearson followed up a season's best run in the heats with an Australian record of 12.48 seconds to win the final.

The 24-year-old Commonwealth champion and Olympic silver medalist posted the quickest time in the world this year, leading from first to last hurdle and holding off Danielle Carruthers of the United States, who finished in 12.52. Carruthers' compatriot Virginia Crawford was third.

"I knew I was in that sort of shape today," Pearson said. "I've come to Europe to get ready for the world championships and I've had fantastic preparation. It's all just come together. I'm in shape, I've got my diet right, I haven't missed anything. And I'm happy as well.

"I've always wanted to be the best in the world and I'm heading in that direction."

The United States had a 1-2-3 in the women's 200 as Bianca Knight beat Marshevet Myers in a photo finish, with both clocking 22.59 seconds. Carmelita Jeter, the world leader over 100, had to settle for third.

Knight, the leader in the Diamond League over 200, just missed out on qualifying for the United States team for the world championships when she finished fifth.

"I couldn't make the team so I've come out here to win the Diamond," she said. "This is my compensation. Tonight was the start."

The women's 400 was dominated by Amantle Montsho of Botswana, who extended her Diamond League lead over Allyson Felix with her fourth win in the series.

The 28-year-old Commonwealth champion was still pulling away from her flagging rivals as she crossed the line in 50.20, ahead of Jamaican pair Rosemarie Whyte and Novlene Williams-Mills.

In the men's 400 hurdles, Dai Greene held off 2005 world champion Bershawn Jackson in the home straight to win in a season's best of 48.20 seconds.

The 25-year-old Briton was well ahead midway through the race but Jackson made up ground to be almost level with Greene going over the final hurdle.

Urged on by a 12,500-capacity home crowd, European champion Greene kept his form to the line for his second Diamond League win after posting his first in Lausanne 10 days ago.

"I'm very pleased with a season's best in horrible conditions and I'm happy - very happy - to get the win," Greene said. "I need to be competitive with these guys and I'm at the top at the moment."

The home crowd had another win to celebrate when Mo Farah won the 5,000 in 13 minutes, 6.14 seconds ahead of Galen Rupp of the United States. Farah is the fastest man over 10,000 this year and one of Britain's leading medal hopes at the world championships.

The much-anticipated clash between triple jumpers Phillips Idowu of Britain and Teddy Tamgho of France failed to live up to expectations as Tamgho struggled.

Idowu, the world and European champion, won with a best of 17.54 in the third round. Tamgho, who beat his British rival in Lausanne last time out, came fifth with 16.74 - a long way short of his personal best of 17.98.

They will meet again at the next Diamond League meeting in Monaco on July 22.

"I'm not worried about today," said the 22-year-old Tamgho, who afterward wore a baseball cap with his name on the front. "I'm close to doing something amazing. I just have to wait." 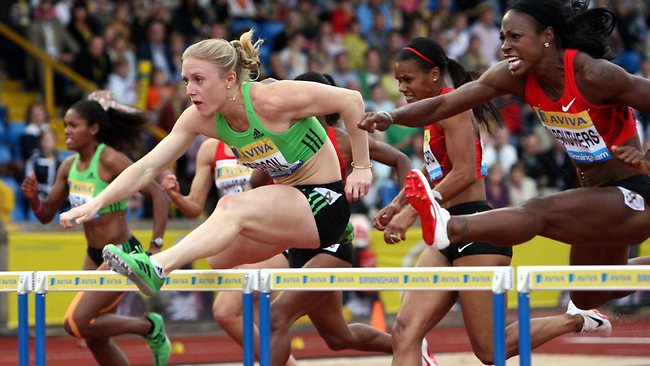 OLYMPIC silver medallist Sally Pearson broke her own national 100m hurdles record and set the fastest time in the world this year overnight.

Pearson is firming as the favourite for the world title in Daegu in September after two consecutive Diamond League wins over her main rivals for the title, Americans Kellie Wells and Danielle Carruthers.

The fearless Australian's national record had stood at 12.50sec, set in Monaco two years ago, until this meet where she confirmed she was in career-best with a stunning 12.48sec.

Despite a wet track in Birmingham and the presence of the Americans on either side of her, Pearson made a brilliant start to the race and led from gun to tape, holding off the late challenge from Carruthers, who finished second in a personal best of 12.52sec.

Pearson had earlier set a meeting record of 12.57sec in her heat of the event, and her final time earned her both the meeting and the stadium record.

"I knew I was in that sort of shape today. I really did," Pearson said.

"I've come to Europe to get ready for the world champs and I've had fantastic preparation. It's all just come together. I'm in shape, I've got my diet right, I haven't missed anything. And I'm happy as well."

"I had a fantastic start and my last four hurdles were my best. I just want it so much. I've always wanted to be the best in the world and I'm heading in that direction.”

Returning distance star Craig Mottram qualified for the world titles with a sixth place finish in the 5000m in 13:11.51, easily under the qualifying standard of 13:20.

Mottram has not represented Australia since the 2008 Olympics as he fought a career-threatening achilles tendon injury.

Samuels began her European campaign with a solid third placing and a throw of 62.33m at the same meet, while Bannister's throw of 82.01m for third place will earn him a ticket to the world titles.
\
It has been an excellent few days for Australian athletics following multi-talented Sydney teenager Jake Stein's impressive victory in the Octathlon at the world youth (under 18) championships and silver medals for pole vaulter Liz Parnov and 400m hurdler Sarah Carli.