Log in
Search
Latest topics
» When will Stawell 2020 be held?

Jeff Riseley's 1k form sets him up for the Dream Mile 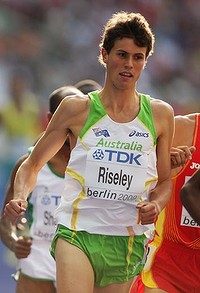 AS A distance it is irrelevant, as a race and performance it was perfectly relevant. Australia middle-distance runner Jeff Riseley yesterday won the 1000 metres at the IAAF World Challenge meet in Ostrava, Czech Republic.

In one sense winning the 1000 metres, even in world-leading and personal-best time, is a bit like winning the par-three tournament at the US Masters, it all should help but in the end it is not an Olympic or world championships event.

For Riseley, who last Sunday at a California meet ran an 800 metres world championships qualifier and became the third-fastest Australian of all-time, the issue of the merits of the seldom run 1000 is somewhat inconsequential.

What was pertinent was that it continued a strong form line as he pushes for a qualifier in the 1500 and, just as importantly, reinforced just what an intimidating kick he has when it matters.

Riseley coasted at the tail of the field until the last lap when he made his move and picked off runner after runner before striding away in the straight to claim the win and prove that he has a strong sprint to draw on when he puts the hammer down.

He won in two minutes, 16.75 seconds, which was the fastest in the world this year, albeit the distance is seldom run, and was only 14-hundredths of a second shy of Grant Cremer's 11-year-old national record. ''The race started quickly and Jeff handled himself well, he was composed and made his move when it mattered,'' said Riseley's coach Nic Bideau.

Riseley will now look to the Dream Mile at the Diamond League meet in Oslo on June 9. His Australian rival, Ryan Gregson, will further his return to competition after injury this weekend, competing in the mile at the Prefontaine Classic in Eugene, Oregon.

■ Usain Bolt powered to victory in the 100 metres in 9.91 seconds at Ostrava, and then said he should have gone faster. In only his second race of the year, Bolt pulled away from fellow Jamaican Steve Mullings to finish with the exact time he posted last week in Rome.

''My time, 9.91, is not bad but it could be better,'' he said. ''I expected a faster time.'' Bolt said all that mattered this year was to defend his title at the world titles in Daegu, South Korea.