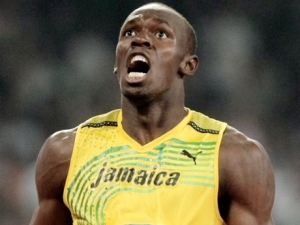 Bolt watching his rivals from afar

While his two main rivals were tearing up tracks half-way across the globe, track and field’s ‘it’ man Usain Bolt was just about getting out of bed.

Tyson Gay, the fastest American in history with a personal best 9.69 seconds and Bolt’s main rival in the 100m, was busy in Manchester, England where he was trying to better the Jamaican’s record over 150m.

Earlier, Jamaican and former 100m world record holder Asafa Powell was busy laying his mark in the 100m at the Shanghai Diamond League meet, winning his event in 9.95 seconds, the second fastest time so far this year.

Bolt, who set world records in the 100m and 200m at the 2008 Beijing Olympics as well as the IAAF World Championships in Athletics a year later, was just about waking up when Powell was streaking to his season-opening 100m victory.

No worries for the 24-year-old, who says he is expecting everybody to be at their best this year with the IAAF World Championships of Athletics, Daegu just a few months around the corner.

“I woke up just in time to see Asafa’s race,” said Bolt, during a recent chat with The Gleaner. “It’s a World Championships year so all the athletes will come out gunning but of course its still the early part of the season.”

Bolt himself will get his campaign rolling on May 26 at the Golden Gala meet in Rome, where he is set to face Powell in his first serious 100m since his loss to Gay at the Stockholm Diamond League last year August.

However, the Olympic and World 100m and 200m champion is not too concerned about what happens on the circuit this season, with his sights set squarely on this year’s big show – the IAAF World Championships in Athletics, Daegu.

“My main aim is of course the World Championships it doesn’t matter too much what happens leading up to that, the focus is to get the gold medal there,” said Bolt.

World records? Not a big deal for the 24-year-old this year either.

“People will always look for world records when I run but I don’t necessarily go out there and look for records, my aim is always to win and if I am able to do so I am ok with it,” Bolt underlined.

In fact, the athlete made it clear that despite this being a World Championships year, his main focus is certainly on the grandest stage of all - next year’s Olympic Games in London, England.

“I’m going to defend my titles (at the World Championships) but for me Olympics is the biggest event and that’s where all things should be done in greatness, so I’m just trying to get through this season, defend my titles and hope for the best next year,” Bolt noted.

Healthy Bolt assures that his back is fine
By André Lowe, Senior Staff Reporter
Jamaican Gleaner
17th May 2011

"I am fit and ready to start my season." That's the assurance from the world's fastest man, Usain Bolt, in response to queries about his health in light of successive visits to German doctor Hans Muller-Wohlfahrt, for treatment and consultation on his well-documented scoliosis condition.

The sprint superstar was born with scoliosis - a curvature of the lower spine - and has felt its effects particularly since his increased physical workload, with related injuries to his back and hamstring playing havoc on his career at times.

Interestingly, the athlete is subjected to specialised back exercises several times a week to help limit the effects, part of the price that must be paid for him to stay atop of the sprint heap.

"It's (scoliosis) not as serious as it sounds but, for me, as a track athlete, it can be serious. "I work really hard to keep it away but, of course, it's still there," said the former world youth 200m champion.

Bolt, who has already seen Muller-Wohlfahrt twice since the start of the year, played down whispers of a possible flare-up of the back problems that led to an early halt of his 2010 season. The fears were due to the fact that while it has become part and parcel for the double Olympic and World sprint champion to see the specialist twice for the year, it isn't exactly normal for him to seek consultation twice so early in the year.

However, the athlete sought to assure that his trips were precautionary and part of his routine.

regular check-up
"I am fine, I feel good and I just went there (Germany) for my regular check-up," Bolt pointed out. "Yes, I know that people have been questioning if I am ok, or when I am going to run, and so on, but so far everything is fine and I'll be opening my season at the end of the month, as was originally planned."

Bolt, while admitting that his pre-season preparations did not go exactly to plan, underlined his anxiety at finally facing the starter this season, and said he was in fact feeling a bit nervous ahead of what promises to be another big season for the sport's brightest star.

The trimmer, fitter Bolt is expected to line up in the 100m at the Golden Gala in Rome on May 26.

"I wouldn't say it's the perfect start to the season. Yes, I've had a small setback but it's getting there and I'm now looking forward to my first race in Rome," said Bolt.

"To be honest, I'm a little bit nervous with it being my first race of the season but I'm looking forward to it and to get the ball rolling."

"I think I have lost about eight to 10 pounds so, yes, I have trimmed down a little and I believe more muscles have gone on. I have been working hard to keep my core together and, in doing that, I have gotten much more muscles, so for me that's the aim, to try and get everything together; my start, full power and everything else."

Glen Mills, coach of double sprint World Record holder, Usain Bolt, insists the sprinter is on target to realise his ambitions of retaining both the 100 and 200m crowns at the IAAF World Championships in Daegu, South Korea, later this year.

Bolt is expected to make his long-awaited season debut, when he faces compatriot Asafa Powell at the Golden Gala meet in Rome over 100m next week.

In his 100m opener last year, Bolt clocked 9.86 seconds in South Korea, after registering an impressive 19.56 over 200m earlier in the season.

Mills, however, revealed very little about what kind of shape he believed the sprinter was in, timewise. At the same time, the coach rubbished rumours that the sprinter had clocked 24-plus over 250 metres at a time trial last week.

"That's a false report. I do not predict the times, I too am interested to see what he can do in his first race," Mills told journalists at a luncheon put on in his honour by the Rotary Club of St Andrew, at the Pegasus hotel yesterday.

The coach, however, said his elite athlete will be taking a different approach in preparing for the blue riband event this year.

kick off season next week
"He is where we want him to be. We have several months to go to the World Championships and that is his target," said Mills. "Having been there before and being the defending champion, his targets are different. It's not like when he just started, we know exactly what he can do and his preparation is along that line."

He added: "He is scheduled to start in Rome next week. We were a bit behind in our training schedule, but it's a long season. This year is the latest that the World Championship will be held, so we have to strategise our preparations. If you notice most of his serious major competitors have just started running, so it's not anything out of the ordinary to start at a later point in the season."

Mills also sought to allay fears that the runner's troublesome back condition has been a significant hindrance to his training programme this season and insists he will be ready to compete.

Bolt suffers from scoliosis, an abnormal curvature of the spine, which has caused the world's fastest man to constantly undergo treatment from specialist Hans Muller-Wohlfahrt several times per year.

"Going overseas to Wohlfart is a routine thing. He has five visits every year, regardless of what condition he is in, that's standard. He goes five times a year and he has only gone two, so he is doing well," Mills pointed out.

Re: Usain Bolt aims for Daegu & On track says coach