Top Sprinters get a 'bye' in Olympic 100m 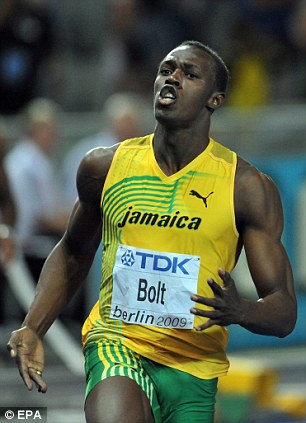 Usain Bolt and other top class sprinters will miss the
first round of the Olympic 100m, going straight to the
second round.

Spectators at London 2012 will be left short-changed by a revolutionary rule that sees Usain Bolt and the world’s other leading sprinters handed a bye into the second round of the 100 metres for the first time in Olympic history.

The break with tradition effectively ushers in a two-tier Olympics at odds with the institution’s original ideals.

Sportsmail can reveal today — as the schedule and ticket information for next year’s sporting carnival is released — that fans who pay between £20 and £150 to attend the morning session in the stadium on August 4 will see the likes of Bolt, Tyson Gay and Asafa Powell in action just once.

The household names will miss what would have been the first round — but is being rebranded the ‘classification’ stage — before competing in the old second round, which will now be called the first round.

As well as being sure to leave fans dissatisfied, it deprives the athletes from smaller countries of the thrill of running against the elite, as they have in every Olympics of the modern era, since Athens in 1896.

As one insider said on Monday: ‘Where will it all end? With seeding for the stars? It’s not in the spirit of the Olympics.’

The IAAF, the governing body of athletics, defended the change. ‘We’re going for what is a crisper, more modern programme after consultation with athletes, TV and officials,’ said spokesman Chris Turner. ‘We’re doing the same this year at the World Athletics Championships in Korea.’

Time will be saved because the absence of top sprinters will reduce the number of heats needed for the ‘classification’ stage. In all, the anticipated finalists will run three times rather than the usual four.

The semi-finals and final on Sunday, August 5 will be preserved in their regular format. Tickets for this most cherished session range from £50 to £725.

The 100m has always been popular. Even the smallest nations are allowed one male and one female athletics competitor, regardless of qualifying standard, and many choose the shortest and most glamorous event. Countries such as Kiribati and Afghanistan contested the 100m in Beijing.

The slowest runner, Shanahan Sanetoa of American Samoa, clocked 12.6sec — almost three seconds more than Bolt’s winning time. It would not have got him into the next round of the women’s 100m.

The Olympic schedule opens the possibility for Jessica Ennis, one of Britain’s chief gold medal aspirants, to take part in the sprint relay as well as in her main focus, the heptathlon, which ends on August 4.

She would have four full days to recover before returning to the track.

‘I might give it a go,’ she said, aware that she would need to practise baton changeovers with the team before being selected. ‘It’s about whether I can commit
the time.'