PROTRACK » International Results & News » Patient Asafa Powell hoping to stay healthy BUT does he still have the Appeal?

Patient Asafa Powell hoping to stay healthy BUT does he still have the Appeal? 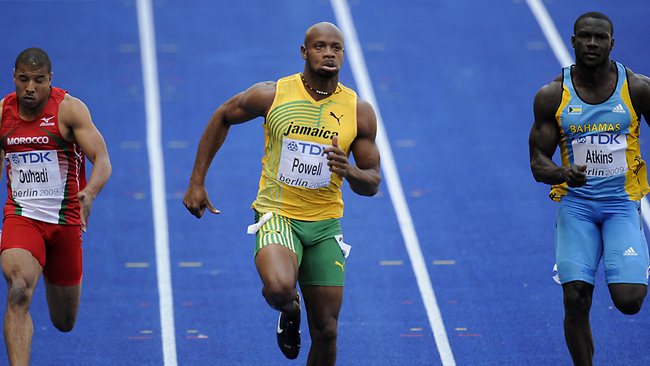 ASAFA Powell has broken the 10-second mark in the 100 meters more times than anyone in history. Only he doesn't have the titles to show for it.

Powell is hoping to stay injury-free this season and finally shed a label that's trailed him around the track - best sprinter never to win an individual crown at a major event. He will get another chance this August at the world championships in Moscow.

He can't remember the last time he was completely healthy. It seems he's always contending with a balky hamstring or a nagging groin ailment, like the one that caused him to pull up in the 100 at the London Games last summer.

Sometimes, Powell just can't help but wonder what he might have accomplished had he stayed healthy.

"A lot of things would've been different,'' the 30-year-old Powell said in a phone interview from Australia, where he was scheduled to race before withdrawing due to a tweak in his left hamstring. ``I would be running a lot faster. The competitions would be a lot better, I think. I would've accomplished a lot more at world championships. For years, I could've been winning all these world championships, the Olympics.

"Those things, I've thought about.''

There was a time not too long ago when the Jamaican sprinter ruling the track was Powell, holding the 100 world record from 2005 until Usain Bolt claimed it in 2008.

And while Bolt has captured back-to-back Olympic titles in both the 100 and 200, Powell has never won a title of his own on the biggest of stages. For all his fast times, he just can't seem to replicate that speed at worlds or the Summer Games.

Just why that is has left many puzzled.

"I think that Asafa clearly doesn't deal well with the pressure of a final,'' said Ato Boldon, a four-time Olympic medalist and NBC sprint analyst. ``Because if you lined Asafa up with the rest of the planet, I don't think there are more than one or two that should ever beat him on any given day. But when the planet lines up and it's for a championship, he hasn't been able to deliver.

"It's frustrating because if you were in a lab and you wanted to create the perfect sprinter, he would look like Asafa Powell. Physically, Asafa Powell is the perfect height, weight and build, everything for a sprinter.''

Powell has finished no better than fifth in three 100-meter finals at the Olympics. Last summer in London, he pulled up early because of his groin and wound up eighth.

"It was hard,'' Powell said of sitting on the sideline as Jamaica won in a world-record time. ``Brush that off and move on to the next one.''

His chances of breaking through at a major meet aren't getting any easier. After all, Bolt is in his prime and fellow Jamaican Yohan Blake appears to be the next big thing. The Americans still have Justin Gatlin and Tyson Gay running at an elite level.

"In my expert opinion, Asafa's chances at a title are years in the rearview mirror,'' Boldon said. ``But I've always been seen as an Asafa basher. That's not the case. In a lot of ways, he might be my favorite Jamaican sprinter of all time. ... It's just all those guys are still around and they aren't afraid of him in a championship.''

Throw in the towel? Hardly.

He's practicing with a different mentality this season, putting in even more work in the gym.

This from a sprinter who's gone under 10 seconds around 80 times in his career, which is more than Lewis and Greene combined. Powell broke the world mark on June 14, 2005, when he crossed the finish line in 9.77 seconds at a meet in Greece. Two years later, Powell bettered the record, going 9.74 in Italy.

That held until Bolt broke it in May 2008, eventually lowering the mark to 9.58 with his performance at worlds in 2009.

"We have a good rivalry, a friendly rivalry,'' said Powell, who also shares a love of cars with Bolt, and is currently restoring a dark blue 1972 Chevy Malibu. ``When we're on the track, it's a serious business. Off the track, we're good.''

Powell's schedule will have him competing quite a bit internationally in May and then backing off before worlds just to stay fresh.

After all, that elusive individual title would go a long way in cementing his place in track history.

"Everyone always says I'm the first one to really help Jamaica take over the world. I was the one who started that,'' Powell said. ``Everyone remembers me for that - remembers all the times I ran. They see the potential, that I have it in me to break the record. I want people to remember me as one of the greatest sprinters ever.''

He brands himself as the 'Sub-10 King' these days and no one can dispute it, as he has posted a record 88 sub-10 seconds marks in the 100 metres.

But with seemingly non-stop injury problems and failure to win an individual medal since his 100m bronze at the 2009 IAAF World Championships in Berlin, the question was asked: is Asafa Powell losing his appeal on the international circuit?

According to his agent, Paul Doyle, Powell remains a big name on the circuit, and while there are some concerns from race promoters about his constant injury issues, his client still has a lot to offer.

"Is he (Powell) losing his appeal? No, not yet; of course there is some concern when we do deals with meets and people ask if he is going to show up healthy or if he is going to finish the race healthy, but a lot of athletes have that issue," said Doyle during a recent chat with The Gleaner in Eugene, Oregon.

Powell, who celebrated his 30th birthday last November, has had his high points in the sport - breaking the 100m world record twice, winning gold at the Commonwealth Games in 2006 and mining back-to-back bronze medals at the World Championships in 2007 and 2009.

Injury-affected races
However, he is yet to stand at the top of the podium at a major international championship, and with a long list of injury-affected races, coupled with the emergence of the likes of World Champion Yohan Blake, Powell has seen his stocks fall somewhat.

With the World Championships set for Moscow later this year, Doyle and his team have been hand-picking the athlete's overseas assignments in an attempt to limit his travels ahead of what is expected to be a tough National Championships.

"We are planning to be relatively conservative with his travel prior to the trials. The one long trip that he will be doing is Beijing and we are working on the rest of his schedule, but he won't be travelling much ahead of the trials," said Doyle. "He is getting older and travel takes its toll on you, so we want to keep him more rested and focused on trials."

Powell's last international appearance was at the Stawell Gift Festival in Australia in January, where he also pulled up injured in the preliminary round.

"The goal this year will be to get a medal at the World Championships, but he has to get on the team first and it's obviously as competitive as ever in Jamaica, so he is preparing for trials and that's really the first step of the season," Doyle noted.

PROTRACK » International Results & News » Patient Asafa Powell hoping to stay healthy BUT does he still have the Appeal?