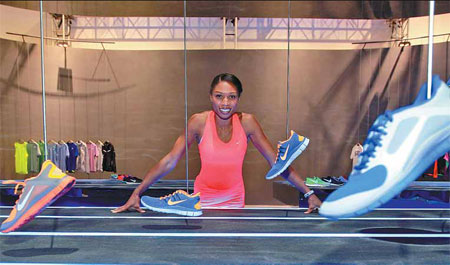 After claiming three gold medals at the London Olympics last year, the most by a female track athlete since Florence Griffith-Joyner also won three golds in 1988, you could reasonably expect sprinter Allyson Felix to be more than satisfied with her career in the fast lanes of the world.

However, there appears to be no slowing down for the sprightly 27-year-old as she has her sights firmly set on regaining her 200m world champion title at the Moscow World Championships in August and more Olympic glory at the 2016 Rio Games.

"I would love to be a world champion (at the Moscow worlds). I would love to win the 200m, the relay and participate in the 100m as well," Felix said while attending the launch of Nike's new line of track shoes in Beijing this week.

"I have to make our team first. Qualification is in June. I think I have good chance. Preparations are going well. But still it's quite a way away. So I have to continue on."

Felix, who played basketball as a young girl and didn't discover her gift for sprinting until she tried out for track in the seventh grade, became the youngest-ever gold medalist in the 200 meters at her debut World Championships in Helsinki in 2005. Before that, she showed her potential by winning silver at the 2004 Olympic Games in Athens, when she was just out of high school.

Just 10 weeks after her first track tryout, Felix finished ninth in the 200 at the CIF California state meet. In the following seasons she became a five-time champion in the event. In 2003 she was named the national girls "High School Athlete of the Year" by Track and Field News.

As a senior, Felix finished second in the 200m at the US Indoor Track and Field Championships. A few months later, in front of 50,000 fans in Mexico City, she ran 22.11 seconds, the fastest in history for a high school girl.

Going onto the international stage, Felix defended her world championship title at the following two worlds - Osaka 2007 and Berlin 2009 - but lost to Veronica Campbell-Brown of Jamaica in 2011.

The long-standing rivalry between the two has always been a highlight at major track meets.

Campbell-Brown bowed to Felix in the women's 200m at the 2007 and 2009 worlds, but claimed gold in the event at the 2004 and 2008 Olympic Games, where Felix had to settle for silver on both occasions.

"I enjoy it. When we compete against each other, we bring out the best in both of us. She has accomplished so much. We have different strengths in our races. So it's really cool when we get to link up and see who comes out on top on the day," Felix told China Daily.

The humble Felix also described her rival as "great".

"We go back and forth so much, but she is a two-time Olympic champion. So, I think she's pretty great," Felix said.

At the 2012 London Games, Felix was finally crowned the Olympic champion in the 200m in a final race that boasted one of the strongest lineups ever assembled in women's sprinting. The finalists included two Olympic champions Shelly-Ann Fraser-Pryce and Sanya Richards-Ross and two world champions Campbell-Brown and Carmelita Jeter.

Felix ran 21.88 sec to win and became the first woman from the US to claim an Olympic sprint title since Gail Devers in 1996. She was also the only woman to break 22 sec in the race.

Campbell-Brown finished fourth this time, following Felix, Fraser-Pryce of Jamaica (22.09) and Jeter of the US (22.14).

"I'm happy for her (Felix)," Campbell-Brown said after the race. "I knew how bad she wanted it."

It was a sweet memory for Felix as well.

"I was so happy. It had been such a long time (for me to claim an individual Olympic gold) I wanted to win so much," Felix said. "So when if finally came together it was very special."

Besides the 200m, she also won gold medals in the 4x100 and 4x400 relays in London. Now, there is at least one more Olympics on her agenda.


High-tech shoes
Allyson Felix was in Beijing for the launch of this summer's newly-designed Nike Free shoes, which use the elastic and durable Phylite as mid-sole material and new tread patterns to ensure the sole's flexibility.

She said the shoes, which are inspired by "barefoot training", have helped her greatly.

"I think it's great. It's something I've been using for a while now," she said.

"It's really vital. I used to do a lot barefoot training and now I'm able to wear my Nike Frees and get the same benefits. I really enjoy them. They prepare my feet a lot for sprinting because you need very strong feet."

"I think working on your muscles and feet is something every runner should do. It's important for everyone, not just for leisure running or competing at the highest level," she said.