I thought Loren Seagrave was coaching Justin Gatlin, but according to this recent interview, Gatlin is now coached by Dennis Mitchell. Interesting move......

I am back and I want that Olympic title again: Justin Gatlin 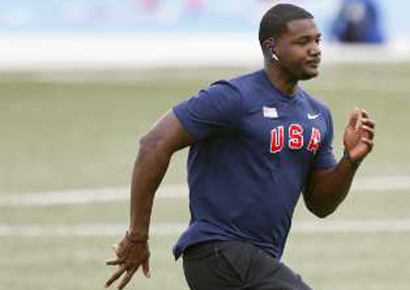 Fresh from his Diamond League-winning performance in Doha on Friday, American sprinter Justin Gatlin tells DNA that it would be great to compete with Usain Bolt at the London Olympics.

Excerpts from an interview:

You just ran the 100 metres in 9.87 seconds! How does it feel?
I want everyone to know Justin Gatlin is back and I want that Olympic title again. I hope Usain Bolt was watching; it will be great racing against him. The Jamaicans have got their team together and we also have to do that. The US has always had good racers; we have Tyson Gay, Walter Dix and me. I am back!

Beating Asafa Powell is no small matter…
It was a great comeback for me. I was feeling a bit sluggish at the start. But that victory felt great, especially because it was my son’s birthday, so it was a special day. I had gone through the record earlier and found that we had met nine times and I had got the better of him (Powell) in six before this.

Doha has been a lucky venue for you…
I have very pleasant emotions of being here. The night I broke the world record (Powell’s 9.77s) in 2006 was magical. I won the first round by equalling my personal record and then coming back knowing that the second round would be faster. I could foresee history being made on the track.

Is Usain Bolt beatable?
It’s like you watching for weaknesses of your opponents in a game like football or basketball. You watch them for what great athletes they are and study them. Watching Bolt perform great feats is awe-inspiring and breathtaking. But he is still human and breathes the same air I breathe and takes the same two steps that I take to get to the line. Just going out there with confidence and giving it everything to get from this line to that line is what I’m working on.

Do you feel you can get back into the same shape that you were in 2004?
That is what my coach Dennis Mitchell talked with me. He wanted me to be in the same shape when I ran in 2004. I think what I have added to that is I have become wiser and competitive. My coach has given me confidence. It is not that I didn’t have confidence of making a comeback but he would keep pushing me harder. If I was neck to the line then he will ask me to jump to the line. He is that type of coach who will push the boundaries. I really appreciate him for the work he has done for me.

Do you feel it is unfair to give drug cheats automatic life bans from the sport?
I think everybody’s story is different. My story is different to that of Dwain Chambers. I think instead of reading the bold print in the headline, people should try and read the fine print. I think whatever time we served innocent or guilty, I think we served that time. Then, after we are back in the sport, to be taken away the privilege to compete despite being tested again and again is unjust.