Usain Bolt anchored Jamaica to a new world record of 37.04 seconds as they won the men's 4x100m relay at the World Championships in Daegu.

The United States crashed out after colliding with Britain, who dropped the baton, on the final changeover.

Bolt, the double Olympic sprint champion and world record holder, teamed up with Nesta Carter, Michael Frater and Blake to better the mark of 37.10 seconds the Jamaicans ran to win gold at the Beijing Olympics in 2008.

The 24-year-old Bolt, who ran the third leg in Beijing, took over the anchor role in the absence of injured former world record holder Asafa Powell and helped set the only world record at the 13th world championships.

"For me, it was just to go out there fast," Bolt told reporters. "We did just that. I am proud of my team. I am happy with myself. I enjoyed being the anchor.

"I had a little problem with my Achilles. I can't run the bend. It was decided I would run the anchor. Yohan Blake ran a great bend. I am happy with that."

The 200m world champion added on BBC Radio 5 live: "We're natural born athletes. It's all about running fast. As long as we got the baton round, I had no doubts."

And when asked is the best yet to come from Usain Bolt, he said: "Definitely. As long as I get my season right, there's going to be great things."

The controversy behind the Jamaicans occurred when America's third-leg runner Darvis Patton clipped Britain's fourth-leg athlete Harry Aikines-Aryeetey as he came into the changeover zone.

Patton tumbled while Aikines-Aryeetey was put off his stride and the incoming Briton Marlon Devonish threw away the baton.

Aikines-Areetey defended himself, saying: "I don't think I went too soon.

"I felt someone hit me and then saw someone tumble over. As to why Marlon couldn't get the baton to me, I've no idea.

"I just want to say sorry it happened. Two years ago I anchored the team to bronze. I had visions of that again."

Semenya powered clear into the home straight and looked set to retain the 800m title she won in controversial circumstances in 2009 when she was forced to undergo gender verification tests.

But Russian Savinova timed her run to perfection to take gold in one minute 55.87 seconds, the fastest time in the world this year, while Kenyan Janeth Busienei took bronze.

In the women's 4x100m relay, the USA's individual 100m champion Carmelita Jeter held off Jamaica's Veronica Campbell-Brown on the anchor leg to win in a time of 41.56secs. Jamaica took silver in 41.70s with Ukraine coming home third in 42.51. 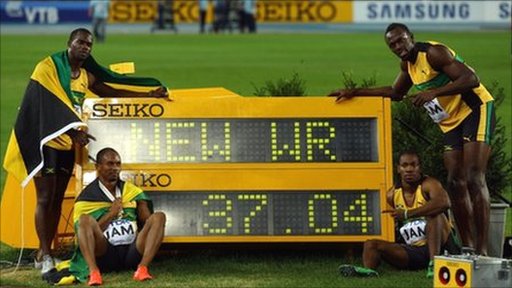